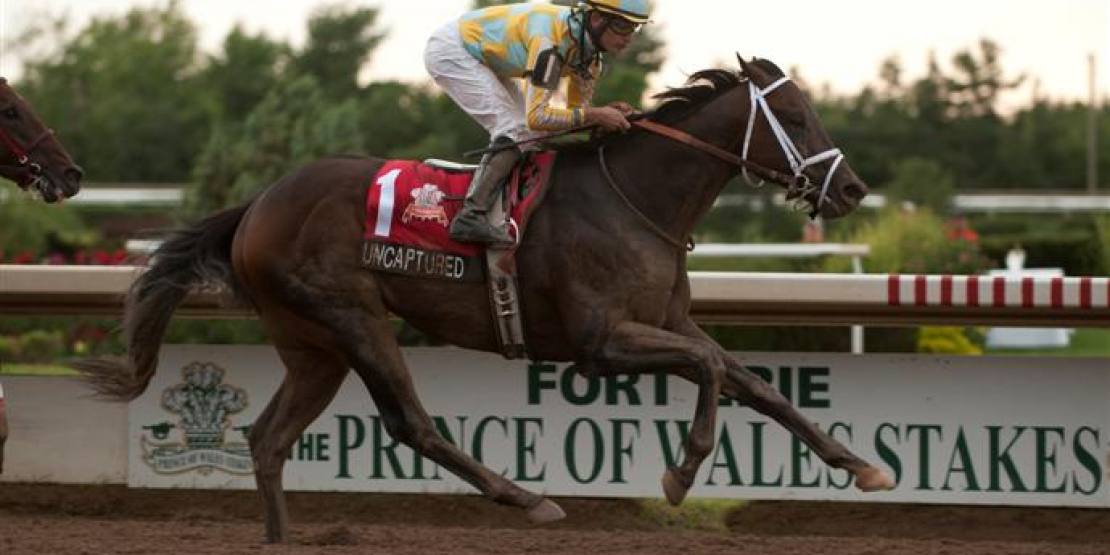 Uncaptured took the lead in mid-stretch and never looked back to take the 78th edition of the Prince of Wales in front of a jam packed, loud and enthusiastic crowd at Fort Erie Race Track.

It was the first win of 2013 for Canada’s reigning Horse of the Year, who was guided to the one-length victory by Miguel Mena for trainer Mark Casse and owner John Oxley.

Mena relayed after the race, in a post race scrum, that he thought he had it won early. “I thought we’d be closer to the pace but he was just galloping along. When I asked him at the half-mile pole, I knew it was over then.”

Although Mena seemed confident and relaxed, Casse wasn’t. “I was very surprised. I was shocked. Going down the backside I kept saying to myself, ‘he really likes the dirt.’ I just wished Miguel would have told me.”

Around the turn, with rivals Jagger M and Niigon’s Glory making bids, Mena had to take Uncaptured five wide to make his run to the front and he did so with ease, with Uncaptured gliding to the lead and drawing off to his sixth career stakes score.

While Casse suspects Uncaptured won’t start in the Travers Stakes, the sport’s marquee mid-summer event, set for Saratoga on August 24. “That’s a toughie. I’m going where Verrazano (impressive winner of the Haskell Stakes on Sunday) isn’t, but I will say for sure that his next start will be on dirt.”

Eurico Rosa da Silva was pleased with River Seven’s effort. “We were really pressed into the second turn, but my horse ran very bravely and ran a good race. I can't complain."

Steven Bahen, who rode Niigon's Glory, was impressed by the winner, "he ran by us like we were standing. He's a nice horse and that's why he was Horse of the Year."

Midnight Aria, who won the Queen’s Plate, first jewel of the Triple Crown held at Woodbine didn’t compete in the Prince of Wales. The Breeders’ Stakes, third and turf jewel of the three race series, is set for Woodbine on August 18.