For the last several years, if you ever combed through the trainer standings at Fort Erie, the name Kevin Buttigieg is one that you would have stumbled across many times, and usually towards the top of the standings. While there is one name listed as trainer, with any racing operation it takes a team to find success and in the case of Buttigieg’s operation, his better half in racing and in life, Sarah is a big part of that success.

Kevin and Sarah Buttigieg both grew up in Ontario, with Kevin growing up in Mississauga and Sarah in St. Ann’s. They were both introduced to horses at a young age. Kevin spent a lot of time as a child at his grandparents and uncle’s farm, and Sarah was born and raised on a horse farm. Growing up around horses certainly sparked their interests early and they never were able to shake the “horse bug”. “I used to go to the races as a kid with my dad at Woodbine and Fort Erie. When I was old enough, I would go in the summer time to Fort Erie with my Uncle Joe to the backside and cared for the horses with him,” said Kevin, when explaining what sparked his interest in the sport.

Sarah’s father was a stallion manager for Bo-Teek Farm before she was born and then her parents had their own farm, where they broke and bred several breeds of horses, including thoroughbreds. “They had a few homebreds of their own that they raced when I was a kid and I would go to the races with them,” said Sarah. “My riding coach as a kid was Kim Dobson and she trained as well.” Sarah started getting on race horses at the farm in the winter time and summers, and after doing that for a bit, began helping Kim and Dave Schmidt on the weekends.

Obviously their love for racing brought them both to Fort Erie, which is where they ultimately met. They were friends for many years and started dating just over ten years ago. In 2015, they got married in the paddock at Fort Erie Race Track. It’s clear that these two have a lot in common, but their favourite thing about Fort Erie is something they share too. Kevin stated that Fort Erie is “a great place to train a horse. Calm and relaxing. Great surface to train a horse on.” Sarah shared the same sentiments, but with more humour. “Super surface to train on and so peaceful. If a horse can’t relax here, they have problems!” 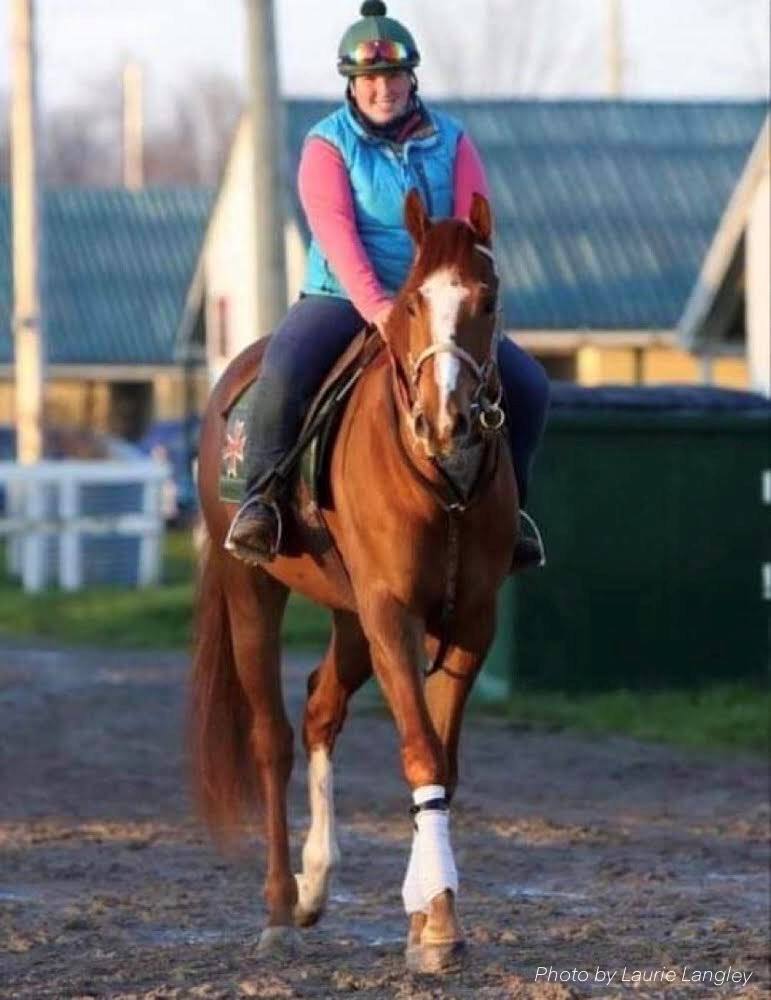 Reflecting on their past runners, they both had a laundry list of favourites, but some notables that stuck out for Kevin were La Vitesse and Bad Boy Will. Not to play favourites, but currently in their barn, Sarah seems to have a soft spot for Trebek and Silent Contempt. One horse that was very special to both of them was Catch The Luck, who won thirteen races in his career, including the 2013 Puss N Boots Cup where he won with authority, drawing off by over eighth lengths in the end. Another highlight was winning two races last year on opening day at Woodbine.

Sarah pointed out that one of the highlights of her career so far has been winning with babies that they brought along. “Seeing the work and dedication pay off is so rewarding,” said Sarah, and that’s what sums up this sport. The teamwork, the labour, the ups and downs... when everything comes together and the winners’ circle is visited, it’s all worth it.

Kevin and Sarah have found so much success here at Fort Erie, as well as Mahoning Valley, where they have wintered the past few years. Last year, they tied for fourth in the trainer standings with 9 wins locally. This year as a whole, they’ve won 15 of 52 races and they’ve hit the board in 38 of their starts. 2020 has not only been off to a hot start as far as wins are concerned, but this winter Kevin reached a training milestone: he picked up his 200th training win with Drena’s Bullet at Mahoning Valley. While 2020 hasn’t been the best of years overall for obvious reasons, the Buttigieg barn certainly found a lot of success and the season started less than two months ago.

This duo has certainly put in a lot of love and labour into their operation and it’s been the perfect recipe for success.