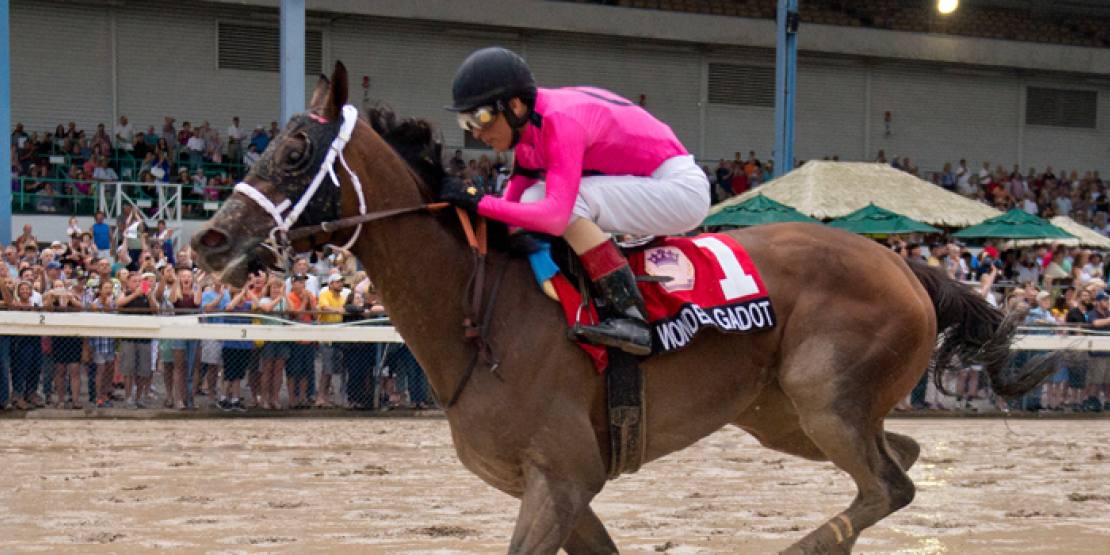 With Hall of Fame jockey John Velazquez in the irons for trainer Mark Casse and owner Gary Barber, Wonder Gadot was hustled out of the gate to take command and never looked back en route to a 5 ¾-length score over a sloppy main track.

“She always gives 100 percent. I'm very proud of her. It was a different surface. A different (running) style today and she responded to what I wanted her to do,” said Velazquez. “I was warming her up and the more I looked at the track, I couldn't have her behind horses today. I wanted to keep her face clean. She was comfortable up front and it worked out well.”

The dark bay daughter of Medaglia d’Oro set splits of :23.65, :48.03 and 1:12.96 with Cooler Mike stalking closely from second. Aheadbyacentury, racing last of six in the early going, moved into contention through the far turn as Wonder Gadot put away a stubborn Cooler Mike.

However, there would be no catching the Queen’s Plate champion who improved on her 2 ½-length lead at the stretch call under light handling from Velazquez. Aheadbyacentury stayed on strong for place 13 ¼-lengths in front of Cooler Mike.
Wonder Gadot covered 1 3/16-miles in 1:58.71.

Casse didn’t rule out the possibility of taking a shot in the third leg of the OLG Canadian Triple Crown, the $400,000 Breeders’ Stakes over 1 ½-miles on turf, which is slated for Saturday, August 18 at Woodbine.

“That's not really my call. It's something Gary (Barber) and I will talk about. There's a possibility of the Breeders', it's just very difficult as it messes up our plans a little bit,” said Casse. “First thing, I'm going to worry about winning today. I was very concerned as she's never run on this kind of track.”

While the prospect of becoming the first Triple Crown champion since Wando completed the series in 2003 is of huge appeal, Casse is keen on a re-match with Monomoy Girl who defeated Wonder Gadot by a diminishing half-length in the Grade 1 Kentucky Oaks, at Churchill Downs earlier this spring.

Monomoy Girl has since added Grade 1 wins in the Acorn Stakes at Belmont Park and the Coaching Club American Oaks, at Saratoga Race Course. Wonder Gadot exited the Kentucky Oaks to finish second in the Woodbine Oaks, presented by Budweiser, ahead of her Queen’s Plate coup.

With Monomoy Girl expected to make her next start in the Grade 1 Cotillion Stakes, at Parx, Casse is contemplating the Grade 1 Alabama Stakes, a 1 ¼-mile dirt race at Saratoga.

“We'll probably try to go to the Alabama and then the (Breeders' Cup) Distaff. We know she likes Churchill Downs, so that's definitely something we're going to point for as well,” said Casse.

The Breeders’ Cup Distaff, at 1 1/8-miles on the dirt, is slated for November 2 at Churchill Downs and would be a fitting site for a potential re-match for year-end honours in North America.

“I have the utmost respect for Monomoy Girl and she'll be tough, but if anybody can beat her I think we can. We're not giving up,” said Casse.